Blackpool Illuminations Switch On 2017 went to an intergalactic place where it’s not been before!

Star Trek was beamed in to save the day when Diversity and Starship Discovery switched on the Lights!

The out-of-this-world Switch On lit up Blackpool Promenade with lasers and pyrotechnics.

After a dazzling performance from Diversity their creative director, Ashley Banjo, sent out a distress signal. He asked for help to power up Blackpool’s famous Illuminations in front of the huge audience.

The Captain of the brand new Star Trek: Discovery TV series, came to the rescue. Gabriel Lorca (actor Jason Isaacs, below) was beamed on to a giant screen.

Diversity triggered an explosion of lights, fireworks and confetti, to start 66 nights of Blackpool Illuminations.

Jason Isaacs is from Liverpool and starred in the Harry Potter films as Lucius Malfoy. He played his role in Switch On from the bridge of the USS Discovery. With brilliant comic timing he said to the audience: “Discovery out. Now go have some chips for me!”

Watch this live video of Blackpool Illuminations Switch On 2017 from Radio Wave.

Blackpool already has a strong relationship with Star Trek. There’s an interactive exhibition on the Golden Mile and features within the Illuminations.

The premiere of Star Trek: Discovery streams on Netflix on Monday 25 September, with a weekly episode each Monday. Coincidentally it ends on November 6 – the day after the last night of the Illuminations season. The second chapter resumes in January 2018. 695 episodes are currently beaming on the service so you can watch all of the classic Star Trek series.

Star Trek is one of the most influential global television franchises, returning to television 51 years after it was first broadcast. The new Discovery series follows the voyages of Starfleet on its new missions to discover new worlds and lifeforms. It features a new ship, and characters.

Stars Came out for the BIG Switch On Party!

Blackpool’s Illuminations Switch On 2017 was a star-studded night, staged in association with MTV.

The crowd was wowed by live performances from Conor Maynard, Sigala, R3wire & Varski, and the MTV Base Garage Anthems show. It was the second year running that Diversity had played a starring role in the event – this year was hosted by MTV’s Becca Dudley.

Sigala took to the stage as a last-minute replacement for Louisa Johnson, who contracted laryngitis and was ordered to rest for 10 days.

International rapper and songwriter Example (above) has performed to sell-out audiences across Europe. He’s worked alongside global stars including Calvin Harris and Chase & Status, as well as acting in numerous movies.

Conor Maynard (above) appeared at the inaugural SLIMEFEST event in 2016 in Blackpool. He’s got a huge following on YouTube and was named as MTV’s Brand New star for 2012.

Diversity stunned the capacity crowd with their astonishing routine last year and have just completed their seventh UK arena tour. They’re widely acclaimed as one of the world’s great dance acts.

Returning for a second year were Club MTV presenters and record producers R3wire and Varski, who brought the house down in 2016.

Once the Switch-On ceremony was over, Example and DJ Wire headlined an hour-long party under the Lights.

Blackpool and The Fylde College students took to the stage as part of the College’s 125-year celebrations.

B&FC’s student choir led the crowd in a special rendition of ‘Happy Birthday’ to commemorate the College’s milestone anniversary.

Andy Iredale is Director of Customer Engagement at B&FC. He said: “With around 20,000 students a year it’s a fair bet that a lot of the audience had been to B&FC or had a connection with the College.

“It’s one of the main events we’d planned to celebrate our 125th year. It was a night to remember and a fantastic opportunity for everyone to join in with the celebrations.”

B&FC has roots back to a small School for Fishermen in Fleetwood in 1892. It’s now England’s most successful, large, general, further education college for student success for the last three years.

Wristbands and Tickets to Switch On

The wristbands for Switch On are allocated on a random basis following a registration draw.

Ride the Lights – 29 August between 7pm and 10pm.
Ride through the resort’s famous Blackpool Illuminations on your push bike or walk on foot.

LightPool – 1 September – 5 November
The third successive year with 3D projection shows on the Blackpool Tower building and a festival of light taking place throughout the town centre during October half-term.

The World Fireworks Championships Blackpool – 8/15/22/29 September
You can see the best fireworks display teams in the world with dramatic and spectacular displays to wow the crowds.

Nickelodeon SLIMEFEST – 21, 22 & 23 October
The ticketed shows will take place at the Arena, Blackpool Pleasure Beach. The shows will feature live performances, games, characters and plenty of slime, music and mayhem!

VisitBlackpool and MTV join forces to stage Switch On

VisitBlackpool announced that MTV will deliver the 2017 Blackpool Illuminations Switch-On event for the second year running as part of an ongoing partnership.

The 2016 Illuminations Switch-On event was widely viewed as one of the best switch-on events in recent years. Nearly 20,000 of you packed onto the Tower Festival Headland to watch the four-hour show.

If you love Blackpool and the Illuminations you ought to sign up for our weekly email newsletter. It’s packed full of interesting things and will arrive in your inbox all 52 weeks of the year.

Sign up for the Visit Fylde Coast enews here 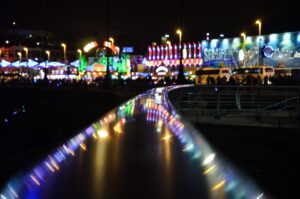